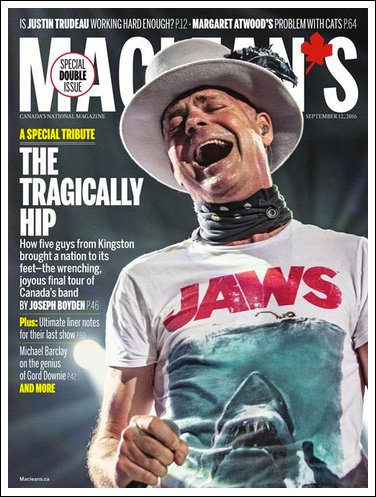 I was approached by Joseph Boyden at the beginning of the “Man Machine Poem” tour about a piece that he and his wife, Amanda were writing for MacLean’s Magazine about The Tragically Hip. Joseph wanted to use my photograph’s to accompany the article.

The article appeared on the cover of MacLean’s September 12, 2016 issue and was titled “The Tragically Hip – How Five Guys from kingston brought a nation to its feet – the wrenching final tour of Canada’s band”.

There is a web piece that accompanies the article called “Joseph Boyden’s seven love songs for Gord Downie” that has more images in it. View it at the bottom of the page here.