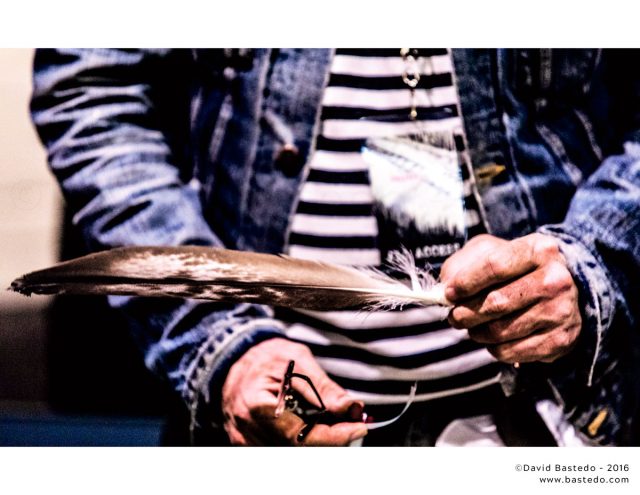 I am pleased to announce that some of my images from The Secret Path tour on display in the Downie Wenjack Legacy Room at the DAREarts Leadership Awards happening tonight.

As well, there are two – previously unreleased images – which Gord has signed – that have been donated to their fundraising auction.

This is an image of Gord Downie holding an Eagle Feather and a – I think the correct term is ‘offering’ – though I am probably wrong, and I apologize ahead of time – of tobacco. (The Tobacco is in a satchel between his thumb and finger). I was lucky to take part in an educational session with members of the band and some of the participants in the various activities that were going on behind the scenes in Ottawa the day of the show – where this image was captured. Gord is staring down, contemplating the significance of the feather recently placed in his hand.

After this, we took part in traditional smudging ceremony, where members of various families were welcomed and shared some of their stories. It was a day I will never forget.

I am really happy to have this image as part of a fundraising auction taking place tonight at the DAREarts Leadership Awards tonight, where they will be honouring Gord Downie with a Cultural Lifetime Achievement Award. As well, there will be a Downie Wenjack Legacy Room set up, and several of my images from The Secret Path Tour will be on display.

This is the first time this image has been shown, and currently, it is the only print that has been made. It is printed on a gorgeous, Ilford, Gallerie Metallic Gloss paper. Full frame printing on 8.5×11 and it has been signed by Gord. It’s truly a one of a kind image. I included a certificate I make for these things. Both it and the image are embossed with my name.

DAREarts is a Canadian charity that empowers at-risk children with the confidence and courage to be leaders, using the arts. When children apply the DAREarts values of Discipline, Action, Responsibility and Excellence, they take charge of their lives and become leaders who ignite positive change in our marginalized communities. For 21 years, DAREarts has delivered out-of-school, arts leadership programs to over 210,000 children from grades 4 to 12. In Vancouver, Toronto, Montreal and Nova Scotia, DAREarts delegates participate in real-world workshops in art, architecture, dance, drama, fashion, literature, music and leadership. They then peer-teach their classmates. As well, DAREarts answers invitations from Indigenous communities to deliver arts programming that aligns with their culture, providing the Indigenous children with creative learning opportunities and hope for their future. Since its inception in 1996, DAREarts has helped to break the vicious cycle of poverty, bullying, depression, isolation and marginalization for Canadian children that too often cripples their success.